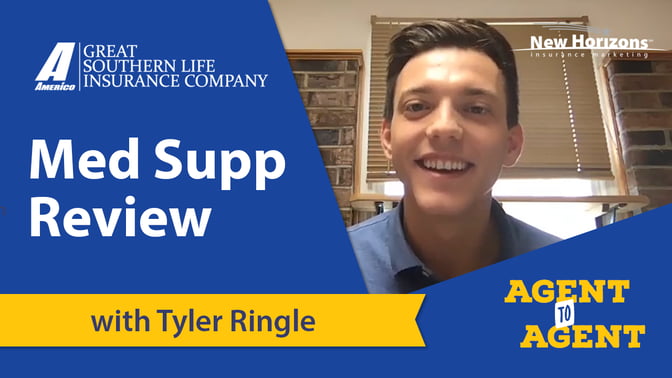 In just 8 months, Tyler Ringle, independent agent, wrote a total of $84,528 in GSL Medicare Supplements for a grand total of 48 issued policies. It's safe to say he's quite fond of GSL, but why?

Tyler Ringle graduated from North Central College last year, and he was working at a State Farm agency selling P&C during his senior year.

Once he started to like it, his grandfather, a seasoned independent agent in the senior market, approached him about learning the Medicare Supplement business.

Tyler is now continuing his grandfather's book of business, and he says it's been going great so far.

Tyler still has to send in paper applications with some companies, and when that's the case, he has to wait for a response for weeks. With GSL, that's not the case.

The instant underwriting has been the biggest stand-out for Tyler.

"If we brought somebody in, we could immediately find out if they've been denied or approved. If they were denied, we could go right to the next company, and try them with somebody else," he says.

Without the instant decision e-application? That same appointment would take nearly half an hour.

What saves even more time is the fact that you don't have to enter in medications.

"If we're doing it with a different company, we'd have to enter in all their medications, and they'd have to bring in all the bottles. I mean if they're older, and they have 20 medications, they could forget one at home, so we're not telling the company the right thing," he explains.

While the instant decision is the major draw for Tyler, the cash bonus is a nice cherry on top.

He explains that most companies do incentive trips – that's been the norm for quite some time. However, the way GSL does their incentive is different. They pay you a 10% cash bonus as long as you hit the $30,000 annual premium threshold.

For Tyler, that's a huge positive, and he really prefers that over the trips other companies offer.

So far this year, Tyler has had 10 declined applications, giving him an 85% approval rate.

While that's a really great percentage, we still have to ask: what kinds of conditions or issues are causing him strife?

Tyler explains, "If they've just went on to a new medication in the past couple months, we usually just tell them to wait a couple of months, because GSL is pretty sticky with that."

For computer-based underwriting, a new medication is a red flag, and Tyler explains that the application will likely be denied no matter what the medication is.

So, that's something to look out for.

"I sigh every time somebody gets denied and I have to do another company, because it's going to be a whole big process, and then I'll have to tell them to come back in a few weeks for the answer," says Tyler.

Plus, with GSL, there's no phone interview.

"We've seen a lot of people that just don't answer their phone if it's from a random number," he says.

And when they do answer? They're generally being asked the same questions they've already told their agent, so they start to get annoyed.

Overall, the process with GSL is quick and easy, and that's why Tyler will continue writing it.

We challenged Tyler to tell us in 3 words why non-contracted agents should start writing Great Southern Life.

He explains that GSL has great rates, they're quick, and it's a great company to work with.