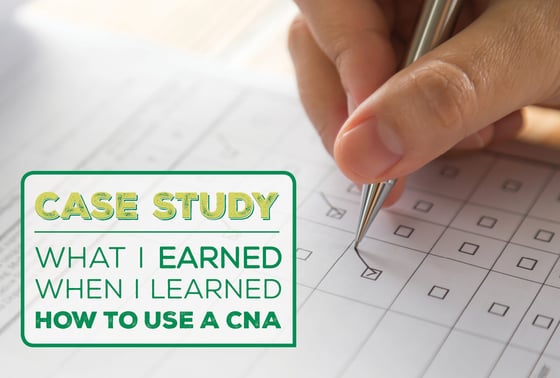 Would you call me crazy if I told you that asking one extra question during an appointment could ultimately make you an extra $21,000?

Well, call me crazy, because this is a real-life case study from senior market insurance agent Laura Pecina.

Back in 2015, I was new to the insurance business. After only a few months in the field, I came across the case I'm going to share with you today.

A big reason behind my finding this case and eventually completing it was because of the Client Needs Assessment tool that we began incorporating that summer. We continue to use it to this day.

[A CNA, also sometimes called a Fact Finder, is a is a 10-part questionnaire that you go through with both new and existing clients in order to pinpoint their pending insurance needs.]

I met this woman in July via door knocking. I was seeking out a Medicare Supplement sale. She was 73 at the time. She welcomed me in, and I went through the CNA.

One of the big areas of concern for me as we went through the CNA is that she didn't have any kind of long-term care coverage. She was also very well-off. She had been a physician for a number of years. In fact, the first question she asked me when I met her was if she delivered me. (She hadn't!)

That got the conversation rolling. She had some assets to protect, and she claimed that she'd pay for long-term care with her life insurance policies.

She didn't have those in front of her, so she asked me to come back several months later in October. I touched base with her periodically throughout that time to make sure we'd keep our appointment.

October came, and she had the policies on hand. It was then that I realized I was looking at something rather substantial.

Before even diving into what we could potentially do to better her position, she was paying over $25,000 per year in premium for a combination of 3 policies. One was paid-up, and two were variable life insurance policies.

As you can imagine, she had acquired quite a bit of cash value with that kind of premium.

The other big thing we had previously covered is that her current agent had never reviewed her policies – ever. That was troubling to her, as you can imagine.

I took this information back to our office, and our Life Insurance Department, Kirk, helped me determine our best plan of attack.

The Policies We Presented

We were looking at the life with long-term care option with John Hancock for several different reasons.

First, we started with an option that was apples-to-apples. She'd be paying the exact same premium that she was currently. We combined it into one policy, and that alone would have substantially increased the death benefit on her life insurance policies.

The second option we did was eliminating her premiums and keeping it strictly as a life insurance policy on the off-chance she wouldn't qualify for the long-term care option.

The third option was eliminating the premiums and adding the long-term care rider on it, which was the one I was leaning towards.

That meeting happened within a week after her presenting me with her existing life insurance policies.

When we were at this stage of presenting the options, we went over the benefits of having long-term care options. I really like the John Hancock product because it's not a use it or lose it product – you're going to use it whether you like it or not, because it's essentially a life insurance policy at its face that could go to your beneficiaries, but should you need long-term care – whether that be home health care, nursing home care, assisted living, or what they call adult day care – you can use this policy to your advantage.

What I wanted her to keep in mind was that this was her decision all the way through and she could pull out at any time should she wish, but we might as well take our chances and see what she could get approved for.

Prepare Your Client (and Protect Yourself!)

With such a large case as this, there's a lot of moving parts that you have to be aware of. I was making sure I was keeping my eye on the ball the whole time. Like I said, I was new at the time and this was a huge case that came my way just because I went through the CNA.

At the time of the application, I was sure to protect myself from a couple things:

It takes time for the applications to be processed, underwriting, medical records... it's not a quick thing with a case like this. She was aware that it could take a month or more for us to have any kind of answer depending on how quickly her medical records were released.

2. Warn them against their existing agent, who is trying to protect and conserve the business.

I told her that her existing agent would probably come at her with a number of things. For example, he might warn her about being taxed, and I explained to her that she wouldn't be taxed because we will do a 1035 from the existing policy. We're not having her cash them out.

The other thing they try to say is that you won't be covered during the time you switch policies. That's not the case with this product (or any that I've come across).

I told her this:

"If they think they can do so much better for you, why haven't they? Why have they not reviewed your policies? Why haven't they mentioned that you can add a long-term care benefit to your life insurance?"

It turns out that her existing agent did reach out to her, and she had some notes.

Her existing agent was questioning my character, which I wasn't too surprised about. So please make sure you prepare that client for this. Make sure they know you're doing right by them and are just exploring their options. If it's not the best, you're not going to do anything.

In some cases, we can't better our client's position, and I strongly suggest you walk away at that point and let them know that you did your best and they're in good shape. They'll appreciate your honesty, and you may get some type of business from them in the future by being honest and maintaining that relationship rather than pushing something on them that's not in their best interest.

When all was said and done, and we got the final offer from John Hancock, she came in at standard. What we were able to do was:

She did decide to go through with it, and it was still the biggest case I've ever come across since I've been working in insurance.

My Advice to Other Senior Market Insurance Agents

I have to stress the importance of the CNA. I was new – I was just flying by the seat of my pants at that point. I had only had a few months under my belt, and I hadn't done anything to this level before.

I still check with her annually. That's something her old agent never did. I call her at least once a year to make sure there's nothing else I can do for her. Check in with your clients. Don't let them slip through your fingers like this other agent did.

It all stemmed from the CNA and asking the right questions.