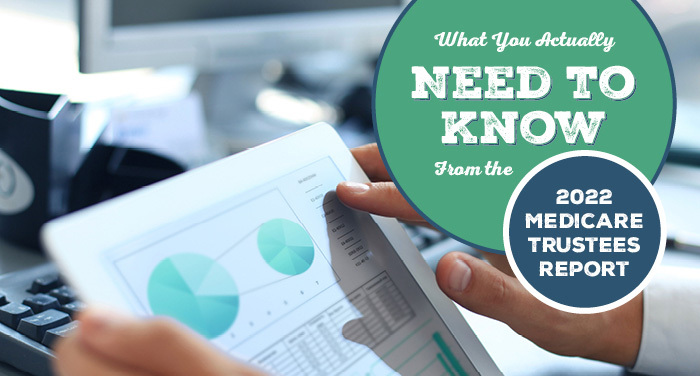 It's a New Horizons tradition – every year, we publish a summary of the Medicare Trustees Report. After all, it’s a few hundred pages long, and who has time for that?

Join us for all the key highlights, including the new estimated depletion date, Medicare Advantage trends, and potential Part B premium reductions in 2023.

→ Read the full, official report from CMS: 2021 Annual Report of the Boards of Trustees of the Federal Hospital Insurance and Federal Supplementary Medical Insurance Trust Funds

Highlights From the 2022 Medicare Trustees Report

Each year, we read the report and summarize it as briefly as we can. If you're short on time and can't read this full article, here's the gist.

Medicare Part A is expected to run out of money by 2028. (It was 2026 for the past four years.) For Medicare Part B and D, the finances are looking fine, because the premiums are set each year to cover expected costs.

For Part A, the trustees are recommending a payroll tax hike or a 15% cut in expenses. Medicare Advantage is still gaining steam – 43% of beneficiaries have it now, and 50% are expected to choose MA by 2031 (p. 180).

If you want a little more than that, you can read some more in-depth information from the report below. Don’t worry – we’ve translated the report into layman’s terms so you can quickly understand what’s going on.

The hot topic of 2022 is certainly Aduhelm, the new Alzheimer's drug, that was approved by the FDA in 2021. The retail cost of this drug at the time was $56,000, though Biogen ended up slashing the price in half later.

When the Part B premiums were set for 2022, the potential cost of Aduhelm – and the financial risk to Medicare – was factored into the 14.5% premium hike.

However, we now know that Medicare has announced it will cover Aduhelm, but only if the person is in an approved clinical trial. That combined with the lower-than-expected cost for the drug has caused CMS to reevaluate the Part B premium for 2023.

So, for the first time ever, Medicare Part B premiums may actually go down in 2023, though we won't know for certain until November.

Making cost projections is more challenging than ever because healthcare technology is moving at lightning speed. The Board explains in this report that looking out more than several decades is nearly impossible because of new interventions, procedures, and therapies.

From the completion of the human genome draft to cutting-edge cancer treatments, some incredible medical breakthroughs are changing the way conditions and diseases are treated in the 21st century.

Diseases and conditions that aren't curable or treatable today may be handled routinely in the future. While advances in healthcare have increased spending in the past, the Board is optimistic that future improvements might increase efficiency and decrease costs.

The bottom line is... well, we have no idea how costs will change as science evolves.

It's always nice to be in-the-know, so here's a look at some Medicare enrollment and spending numbers from this year's report compared to the last four years. Bonus: you'll be awesome at Medicare trivia.

Part B and Part D

What has actually happened:

What is projected to happen: 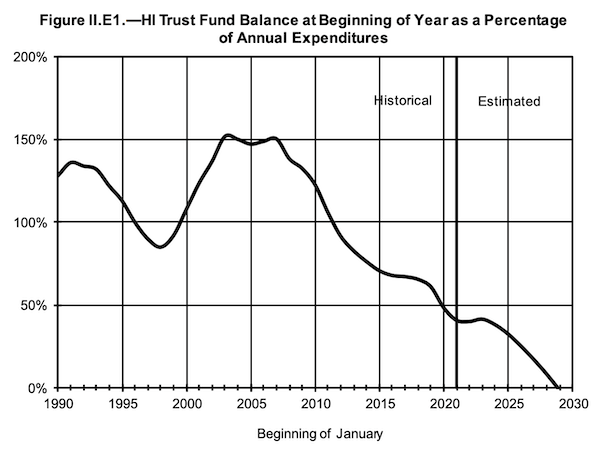 The report is still really cautious, with tons of disclaimers basically saying that anything can happen despite all these projections: “There is substantial uncertainty in the economic, demographic, and health care projection factors for HI trust fund expenditures and revenues” (Page 28). In fact, the report says that every year.

But still… things aren’t looking that great for Medicare.

The trustees explain that the changes that need to happen to eliminate the deficit are pretty extreme. They give two options:

They do say that the changes could happen gradually, but they'd have to be higher in that case compared to just doing it immediately.

In other words, Medicare needs to balance the checkbook, and there are only two ways to do it – get more coming in or spend less. Both of which are difficult to do.