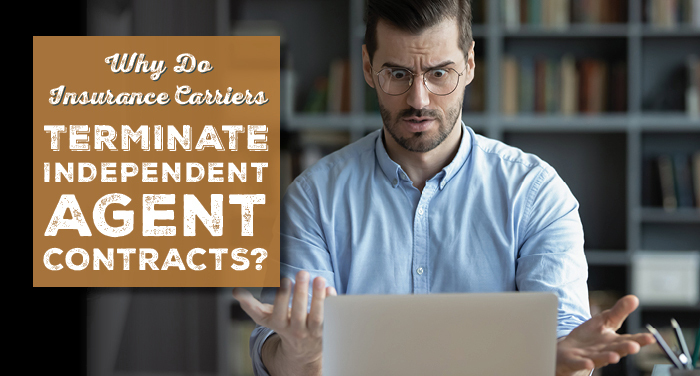 Have you ever gotten a termination letter from an insurance carrier? It can feel like you've done something wrong, but it comes down to lack of production and the costs associated with it.

Here's everything you need to know about carriers that terminate independent insurance agent contracts.

The contracting process definitely takes time and resources to accomplish, from follow-up to checking over paperwork to the submission process (which your FMO takes care of).

Why then would any insurance carrier want to end a contract? After all, they have an agent already set up in their system that could write a policy at some point.

The truth is, it comes down to lack of production and costs associated with it.

Periodically, insurance companies will run reports on agents who haven't been producing any business. They review these lists to determine which agents should be terminated for lack of production.

Why do they do this? Believe it or not, it costs money to have an appointed agent!

Some states impose a fee on insurance carriers for every appointed agent they have. (They have to make money somehow, we suppose...)

If an insurance company has an agent who has produced no business, that agent is actually costing them money every year. It makes more sense to terminate the contract and avoid those state-related fees.

Do FMOs Have to Pay For Lack of Production?

While many states impose fees on insurance carriers, most carriers pass that fee along to the agent. And for agents who produce, that fee is simply deducted from their first commission check. However, if the agent doesn't have any production and doesn't pay the fee, their FMO is on the hook for it.

It's the same thing with chargebacks. If an agent gets a chargeback and doesn't pay it, their FMO is next in line.

This explains why most FMOs are hesitant to set up a new agent with a dozen contracts or more. It's best to start with a select few that are competitive in your area. Once you have some production under your belt, you can expand your portfolio.

It's also far less chaotic to manage agent portal logins and your Agent IDs when you have a core stable of carriers under your belt as opposed to a wide range of companies.

At the end of the day, it doesn't do anyone any good to get contracted with a ton of companies if you don't actually write any business with them.

The initial contracting process takes a lot of time (that's why we have a contracting department!), but there are also state-related fees to consider. If you don't bring any production, it doesn't make sense to carry those fees.

It's always interesting to pull back the curtain and learn a bit more about the inner workings of the senior insurance market.

If you enjoyed this article, be sure to check out: How Do FMOs Get Paid?