Amazon Bought PillPack for $1 Billion: How Does This Impact Seniors? 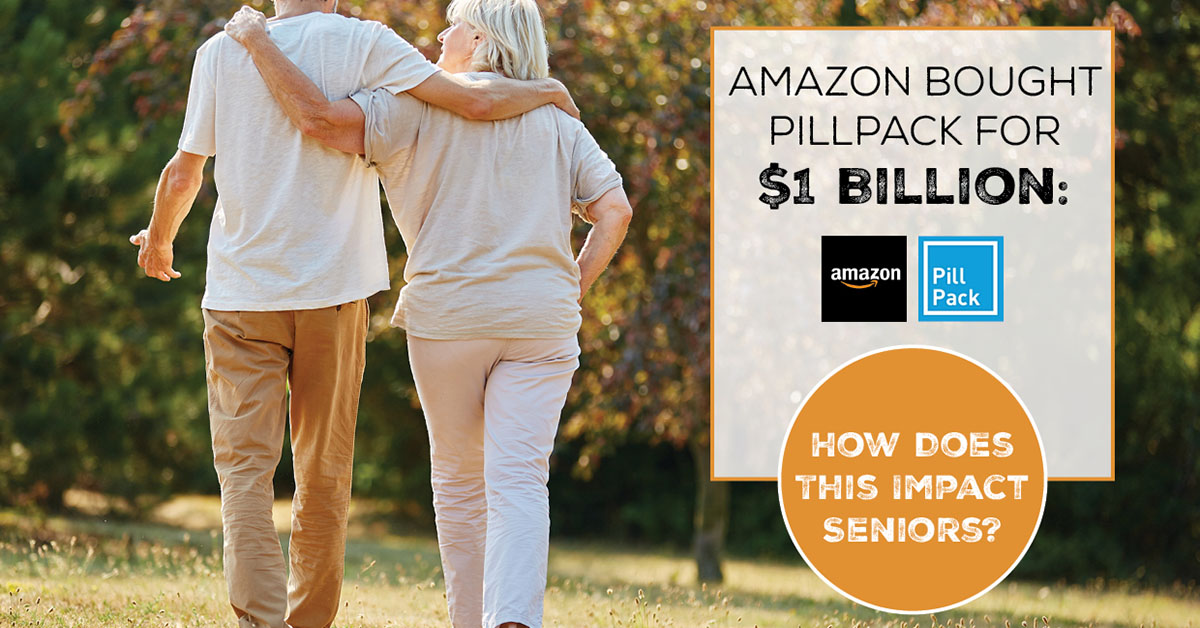 At the end of last year (2017), we heard that CVS was interested in buying Aetna for about $66 billion. Then, we hear that Cigna wants to pick up Express Scripts for a similar amount. Now, Amazon has officially bought the online pharmacy, PillPack, for close to $1 billion.

We’re in the middle of an interesting time for the healthcare industry, and while all of these deals sound both shocking and interesting, most of us are left wondering one simple question: how will this impact me?

We’ve spoken to a number of sources in the healthcare, financial, and pharmaceutical industry to figure out what this means for Amazon, and perhaps most importantly, what this could mean for seniors.

What does Amazon want to do with PillPack?

For starters, PillPack is an online pharmacy that delivers prescriptions direct to the consumer. Their idea was to create new pill packaging that improves adherence to prescription programs.

Justin Danford, Director of Customer Experience and Marketing at HealthWarehouse.com, explains that PillPack processes through insurance and has tight relationships within the PBM industry. “This means that Amazon will either attempt to develop those relationships further or scrap them to disrupt an inefficient industry. I believe the latter to be true,” he explains.

Danford speculates that Amazon purchased PillPack for their licenses more than anything else. PillPack has pharmacy licenses in 49 of 50 states, and it can take years to collect those licenses and to go into business.

However, Danford explains that ties in the pharmaceutical industry run deep. If Amazon did pose a threat to major leaders in the industry (like Walgreens, CVS, and other leading pharmacies, PBMs, and insurers), they could effectively “blacklist” Amazon from the current channels.

“Of course, I don't believe anything can ‘stop’ Amazon (other than a regulatory violation), but this could slow things down significantly,” Danford says.

Lou Haverty, CFA and commentator on investment trends and financial markets, explains that CVS Caremark and other mail order pharmacy providers are going to be the potential losers from Amazon’s acquisition. “You will see those providers seeking out acquisitions up and down their supply chains in order to stay competitive with Amazon in the long term,” he speculates.

With the pharmacy licenses in hand, Amazon could ultimately do a number of things, though Danford anticipates some type of tie-in to the current Prime program.

Brian Carter, popular keynote speaker with Fortune 500 clients like NBC and Humana agrees with Danford, explaining that one of Amazon’s biggest business goals is to grow their Prime membership base.

“PillPack is already in several Medicare Part D drug plan networks. The over-65 demographic hasn’t purchased as many Prime memberships as other age groups. PillPack's appeal to Medicare customers may help Amazon fix that Prime membership gap,” he says.

If Amazon did somehow use PillPack in its Prime program, that would mean free home delivery for seniors, which can be quite appealing.

Jonathan Seliger, CEO of InTouchRX, which specializes in senior care pharmacies, explains that Amazon Prime is a hyper-efficient delivery method that’s disrupting all sorts of industries – perhaps now including pharmacies. “If they can deliver medications within 2 hours in any metro area, there’s no reason to go to a local pharmacy,” he explains.

Seliger continues, “Amazon is trying to bring everything under one roof. They want to disrupt all industries through the scale they provide. They can provide much more scale than a local pharmacy – for example, they can have an entire team dedicated just to helping individuals pay for medications. At a local pharmacy, that pharmacist has to be the jack of all trades. Scale provides impact.”

What will the Amazon and PillPack merger mean for seniors?

None of us can predict the future, but there are definitely some well-thought-out speculations about what this Amazon/PillPack merger could mean for seniors.

Haverty explains that the PillPack acquisition has the potential to be very beneficial for seniors in terms of lowering their drug costs.

“Amazon has the ability to negotiate significant savings from all parts of the supply chain due to its large scale and purchasing volumes. Seniors could benefit by having grocery, pharmacy, and regular Amazon merchandise delivered directly to their door at a much lower cost,” he explains.

On the flip side, Danford doesn’t foresee much of a difference… for anyone. “I don't believe Amazon's entry will do much to change a bloated, overcomplicated industry. We will probably see a ripple effect as health insurance companies and pharmacies scramble to create new value props to secure long-term business even if Amazon enters the game. We may see some immediate improvements to patient services and costs, though they will likely be very small.”

Carter predicts that the merger will force seniors to think twice about considering Amazon Prime. He explains, “For some over 65, such as those with issues of mobility or memory that make it harder for them to consistently fill prescriptions the traditional way, the Amazon/PillPack combo may be ideal. You may see children buying Prime for their parents in these cases.”

While there are mail order pharmacies available today, they’re not exactly as convenient as Amazon’s buying process is. It’ll be interesting to see what Amazon does with this acquisition, and most importantly, if it will end up savings seniors money.

Seliger believes that all of this disruption in the industry is ultimately good for all consumers. “I think what you’ll find is that the existing players will do their very best to compete with the service level that Amazon is offering. They’re being forced to innovate more quickly. For consumers, there’s certainly a lot to look forward to.”

What are your thoughts on Amazon acquiring PillPack? Let us know in the comment section below.