[Case Study] How We Built Our Local Insurance Agency 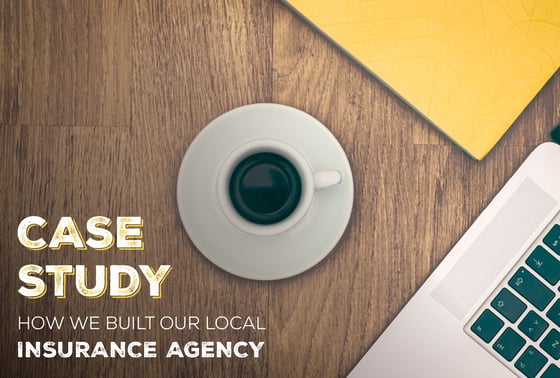 Over 30 years ago, John and I started our local insurance agency. We went through all those growing pains, from making expensive marketing mistakes to finding and hiring the right staff members.

While it was a different time back in the '80s, I still think it'll be useful to hear about how we started our local agency. We've learned a lot, and I hope that we can help at least one agent out there who is wanting to expand their business.

I started in '81 and John started a little before that, but we didn't start the agency until '83. John and I were two partners just sharing overhead. We're so much stronger together than we've ever been apart.

So John and I talked to some friends that we knew were maybe struggling in their job or they had gotten laid off. We knew what kind of money we were making, and we thought we had a great idea of how you can make money.

It was really how can we help a friend over how can we build an agency.

It turns out we built an agency, but our focus was trying to help friends get into a business that we thought was thriving.

We honestly never thought we would grow to where we're at today. That wasn't even in our mindset.

RELATED: How to Manage Growth as a One-Person Insurance Agency

How We Built the Agency

The first thing we had to do was train people how to sell.

John and I would take turns taking the agent out. We'd "field train" them to teach them how to make a sale. We just started getting people and building our own little distribution by teaching them what we knew.

Here was my biggest challenge: I was 23 years old. We were trying to get people to work for us that were at least 10-15 years older than us. Our age worked against us, but we got their respect because we were able to sell a lot more volume than they were.

Both John and I would be top producers, so that's what made them follow our lead, I think.

Related Reading: How to Increase Productivity In Your Insurance Agency

We had to go through all the legal ramifications of starting an agency, and we had to buy equipment.

Keep in mind that in the early '80s, computers were just catching on.

I'll tell you something funny – at one stage of building our agency, we had a lot of discussion on whether or not we needed a fax machine. I thought, "What's the big hurry?" And John would say that we needed one.

It's just funny when you think back on that... I did NOT want to spend the money on a fax machine. I didn't think it was necessary.

Then, we started growing. We had clients from Shelbyville that would call Decatur, and that was considered a long-distance phone call. So, we got a toll-free number. That was a big deal. We got an 800 number.

More people have failed in this business because they get in trouble with the IRS. They do not set money aside and they end up owing a huge tax bill.

John will tell you the same thing. We can tell you about so many great agents that are no longer in the business because they got into tax trouble.

We hired an in-house accountant to help with that. We liked the tax money to be taken out beforehand. If I got $1,000... I already had it spent!

So, we loved it when we said we didn't even want to see that money, and the accountant would take the tax money out before you got your check.

John and I self-funded our growth – we never went and borrowed money.

We would have to work and make sales, and we would each kick in a certain amount each month for what it took to cover whatever we needed.

Growing your own business has so many growing pains. So many risks. Some things you try, fail. More things have failed than were successful, but you just keep trying.

Insurance companies have changed how they do business, and we had to evolve with them. That willingness to evolve has allowed us to keep growing.

I can remember specifically that we weren't even doing $1 million per year, and someone predicted that in a couple years we'd be doing $3 million.

I thought there is no way they were right. But boy, they were way wrong. We started doing $8, $9, and $10 million, and today we're doing $20 million in just Med Supp production.

I can't say that it was just one thing. It was a combination of everything. The fact that we kept reinvesting in the business... I mean we kept our income the same for a long, long time.

We kept putting money back into the business because we knew we didn't want to go borrow it.

Be as giving as you possibly can, because if you get greedy and you try to make too much override on an agent, you'll force them to become your competition.

The fact that we have agents that have been with us for over 30 years... that's because we give them all that we can give them.

In the first couple years, you need to give that agent that's trying to make it all you can give them.

At first, you're not going to make money. But you can make money in that 3rd, 4th, and 5th year.

Getting a Physical Location

We always had a physical location, but we didn't own the building. We paid rent. Finally, we decided to buy the building we're still in to this day. That was one of the only times we did have to borrow money.

You need a physical location – a place where your agents can meet daily. If you're going to build a shop, you need a place that is recognized by the community as an insurance agency.

If you're on your own, you can sell out of your home. But I still think it has a lot of traps. It's hard to motivate yourself to go to work when you know you need to mow the yard and you're sitting there in your house.

Can it be done? Yes. But I think it's much harder.

When we did this in the late '80s, downtown was a ghost town. There wasn't anyone down here. In Decatur, the business world would've told you that you had to be on Pershing or further north.

John and I were on Pershing, but we believed that the bargains were so good down town, so we stopped paying the high rent up north and went downtown.

We turned out to be right. Being up north is not appealing now. You drive on Pershing and the buildings haven't been updated for 25 years, yet downtown is thriving.

So, we did make a lot of mistakes, but that wasn't one of them.

We made a lot of mistakes, but there are 3 that come to mind right away. The first is a claim business we started, and the other two were marketing ideas.

So, we tried a claim business, and we put a lot of resources towards that.

Back in the '80s, Medicare didn't file your claims electronically. The doctor gave you a bill, you had to send that to Medicare, and Medicare would send back an Explanation of Benefits, and it was your job to send it back to the insurance company.

You know what most seniors did? Nothing.

Well, we would help you file your claims whether you bought from us or not. I thought that was silly. We were filing all these people's claims for free.

We said for $110/year, we'll do all your claim work for you. So we started a business called Claim Aid. And we got a lot of business from that.

We got that thing rocking and rolling, and shortly thereafter, Medicare and doctors came out that they could do this electronically.

That killed Claim Aid. So that was our first big mistake.

There's a senior center in Springfield, IL, and they wanted us to come there. They have 200 residents, and we would do a presentation. The idea was that we would donate some televisions, and we would write all the insurance in that high rise.

Well, we did all that, and we gave all those televisions, and you know how much insurance we wrote? Maybe 4 or 5 policies.

It's those kind of things... you get these grandiose ideas, and you spend the money, and it just doesn't bear fruit.

Getting your name out there is important.

We would get involved with the Seniorama, which is a local event for seniors. We did newspaper ads as well, and we would do different campaigns there.

We were very, very involved with the nursing homes and focused on letting people know that we help people who are 65 and older.

Even though this seems so ancient, we mainly promoted our business by mouth. It may be slower today, but it's by far the most effective.

They can see you and ask you questions. One of the other things we did, and this sounds very minimal, but we always did birthday cards and yearly calendars.

Those calendars hung in everyone's kitchen, and for our name to be in their kitchen... we got one leg up. And we were very proud of that toll-free number, don't forget!

I'm not kidding you – when they first started talking about digital marketing... I mean I just got on Facebook not too long ago.

I don't even fully understand how it works. I have a lot better viewpoint now, but we find people like Jason, our Chief Marketing Officer, that are good at what they do, and we ask them to do it for us.

We don't micromanage anybody. Jason tells us what we need, and whatever he told us that we need to do, we trust that he knows what he's talking about.

Here's my philosophy: if you hire the right person, and you micromanage them, you'll drive them away. If you have to micromanage, you have the wrong person.

Advice for Starting Your Own Insurance Agency

I think the best advice I can give an agent that's trying to start out is crawl before you walk and walk before you run. And do NOT fall for any easy ideas. If it was easy, everyone would do it.

By doing a radio or TV ad, you might rely on that one thing to bring you business. Do a combination of everything. Work inside your budget and make sure you pay your taxes!

Know that this isn't going to happen quickly, and don't be greedy.