Our Thoughts on the 2020 Exit of Medicare Supplement Plan F 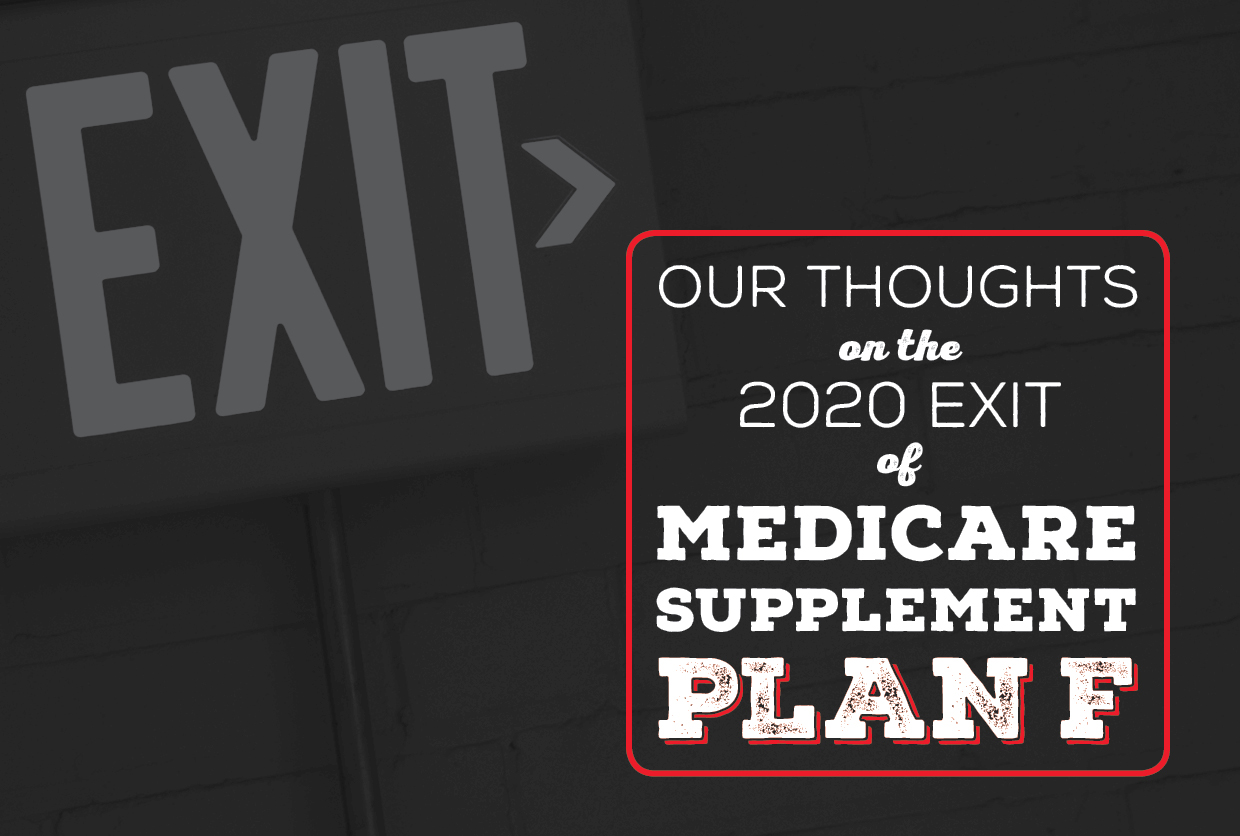 By now, we're all fully aware that Medigap Plan F is changing on January 1, 2020.

At the top of the year, anyone who is newly eligible to Medicare will not be able to buy Medicare Supplement Plan F.

This comes from Congress via a tiny little line at the end of the Medicare Access and CHIP Reauthorization Act of 2015 (MACRA) bill:

"Sec. 401) Amends SSAct title XVIII to deny Medigap policies that cover Part B deductibles to Medicare beneficiaries newly eligible on or after January 1, 2020."

This is a huge change, but when you stop to think about it, it'll be very gradual.

The Gradual Phase-Out of Plan F

Yes, Plan F is going away, but it'll be a long and gradual shift. Everyone that is newly eligible for Medicare Part B before January 1, 2020 will still be able to buy a Plan F.

Think about that... there are around 60 million people on Medicare right now. That's still a lot of people that can get an F.

Every Med Supp carrier wants that F book badly. Why? It's going to be almost all underwritten business.

In fact, recent estimates have been around the 85-90% mark.

The only people who can get Plan F in a guaranteed issue (GI) scenario after 2020 are people that are losing their coverage, and they have to be people that are already on Medicare when 2020 comes around. For those people, F will still be their GI go-to.

But for new people coming in to Medicare? Plan G will be the new GI go-to.

Because the F won't be getting very much non-underwritten business, it's going to be a really pure book. I anticipate that F rates for new people buying after 2020 are going to come down.

What About Our Experience With Plan J, Though?

In case you weren't selling supplements before 2010, we all watched as Plan J was discontinued. When that happened, those plans had the highest rate increases.

A couple years ago, when we were making speculations about the future of Plan F, we did consider the history of Plan J. Would Plan F follow suit?

We now understand the whole scenario a lot better, and Plan F is completely different. Plan J went away completely, whereas there are still going to be over 60 million people who can buy the F.

That's still a big, big market that insurance carriers are going to be trying to capture.

They will try to get all the healthy, underwritten Fs they can get. Knowing there won't be much of the GI component... it's going to be healthy people coming in. It's the best world for Medigap carriers.

That's why we anticipate F rates to drop – not go up.

How Does This Effect Plan G?

The whole market has been heavy on Plan G for the last few years, and Plan G is going to be replacing Plan F for new Medicare enrollees.

That means that new people coming in for open enrollment can't buy an F anymore. They can buy a G, and G is also going to get the GI business for people just coming in to Medicare.

To make sure we're all on the same page here, let's say we're a year down the road and you have someone who is 66. They're in a GI situation, and they won't have F.

This is going to make the G book go up in price.

I don't think the G will surpass the cost of the F, but it'll be interesting to see how that plays out.

What About Plan N?

I think Plan N could really start coming into its own.

It's really been minimized for a while – there aren't that many people that buy an N. I can see that increasing a lot for sure.

You look at people like us – in our late 50s – that are used to a big deductible... I'm not worried about sharing some of the costs.

So yeah, I think we'll see more N being written starting in 2020.

People that have an F now that can't get out because their health is poor can't change – those people will probably continue to see rate increases.

For people that are healthy, they'll be able to get some good buys.

They'll see F rates come down, and they'll have the opportunity to go back to the market and try a different company's F. They can take advantage of competitive rates with any carrier.

What Should I Recommend to My Clients?

I don't want to make too many predictions here, because no one knows what will happen. We all have to make the best recommendations we can with the information we have at the time.

For people that are past age 65 in 2020, Plan F is still wide open for them. If it's underwritten, they can buy G or F. It's just the new people coming in that can't buy F.

I do feel like F is going to be really competitive again. There will be some good buys on F for people whose health allows them to shop around.

Also, the customer doesn't need to get panicky. The beauty of a Med Supp is that they're guaranteed renewable, which means they can't be cancelled. So that product is theirs for as long as they live.

Will they get rate increases? Yeah. That'll never change.

This sounds obvious, but I feel like it needs to be said – do what's best for your clients. That's always the thing. Put their needs ahead of yours – remember that we're not married to a carrier. We're married to our customers.