As an American, I have a great deal of respect and admiration for any service man or woman that has sacrificed for our country.

My hope is to tell you a remarkable story that will honor a marine I've known since he was about 7 years old. I had the pleasure of coaching him as a young boy. 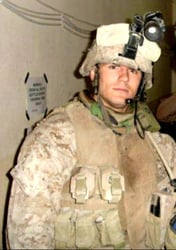 His name is Cpl. Chad Watson, and he is a Mt. Zion hometown hero for anyone who knows his story.

Chad was always tough as a young boy, and that's because his father, Mike, was a driving force in that mental and physical toughness I believe his entire family exhibits.

Mike and Chad have a father-son bond that is second to none. I have seen it for 30+ years, and I am telling you this so you know this is a very real story. It's not a story I've heard or read – this story is as true as the breath you just breathed.

Chad Watson's story is to honor all that have served, are serving, and will serve going forward. The sacrifices made by moms and dads, brothers and sisters, girlfriends, wives, and children of the soldier do not go unnoticed. You have unselfishly served our nation.

Please join with me in learning the story of Corporal E-4 class Chad Watson.

Enlisting In the Marines

Chad was a student at Indiana University on 9-11-2001 when America changed. At the time, he was living a nice college life where he was on the wrestling team, and for most people, living a very comfortable life.

But after the attack on America, Chad felt he had to stop going to school and join the service. While it was something he always felt he would do, he also had the desire to get his college education.

With our nation at war in Iraq, he felt like time was slipping away, and he didn’t want to miss the opportunity to serve his country. After some close friends joined, he felt the need to put his personal life on hold and go serve the United States of America.

Chad had a couple of avenues to pursue. With his education, he could enter the service as an officer, or he could dive in and be an enlisted soldier.

To many, it would make sense to take the officer route. Yes, he would be serving, but he wanted to be where his fellow brothers were. He did not want to serve above or behind his marine brothers – he wanted to serve with them. Hand in hand, step by step, blood, sweat, and I am sure, tears.

Chad went to bootcamp the summer of 2004. 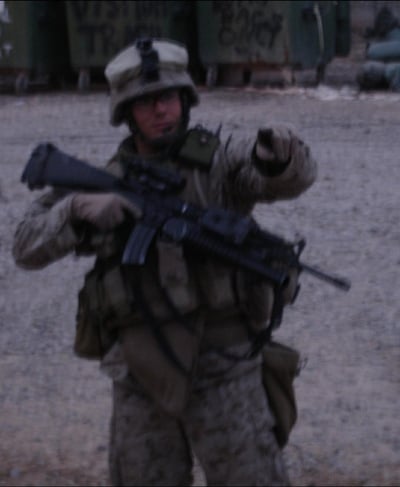 Something did not feel right as Chad's father's letters went from very long to very short. When he finally saw his dad, he knew something wasn't right – he had lost a great deal of weight.

Chad soon found out his dad was battling colon cancer.  Chad got the ability to spend some good-quality time back home with his dad before being deployed in 2005.

After graduating from bootcamp and the Marine Corps School of Infantry – first in his class – Chad volunteered to deploy to Falljuah, Iraq as an Infrantry team leader.

They were working from a city building in the downtown area of Fallujah. While completing more than 65 combat patrol and at least 4 ambushes, he was very much aware of the type of war they were battling.

On November 29, 2006, they received intelligence of a house that would be worth a raid. His small unit hit the house. The house sat on a concrete road, but coming off the main road was a dirt road. This is where the enemy planted an IED under the concrete by burrowing in the dirt road.

When the time came to exit the house, it was in a big hurry, and the way it worked out, Chad became the driver of the Humvee even though it was the job of a new teammate that ended up in the back left seat. They were loaded up and got out of there as quickly as possible. They did not go 4 feet when the bomb detonated. 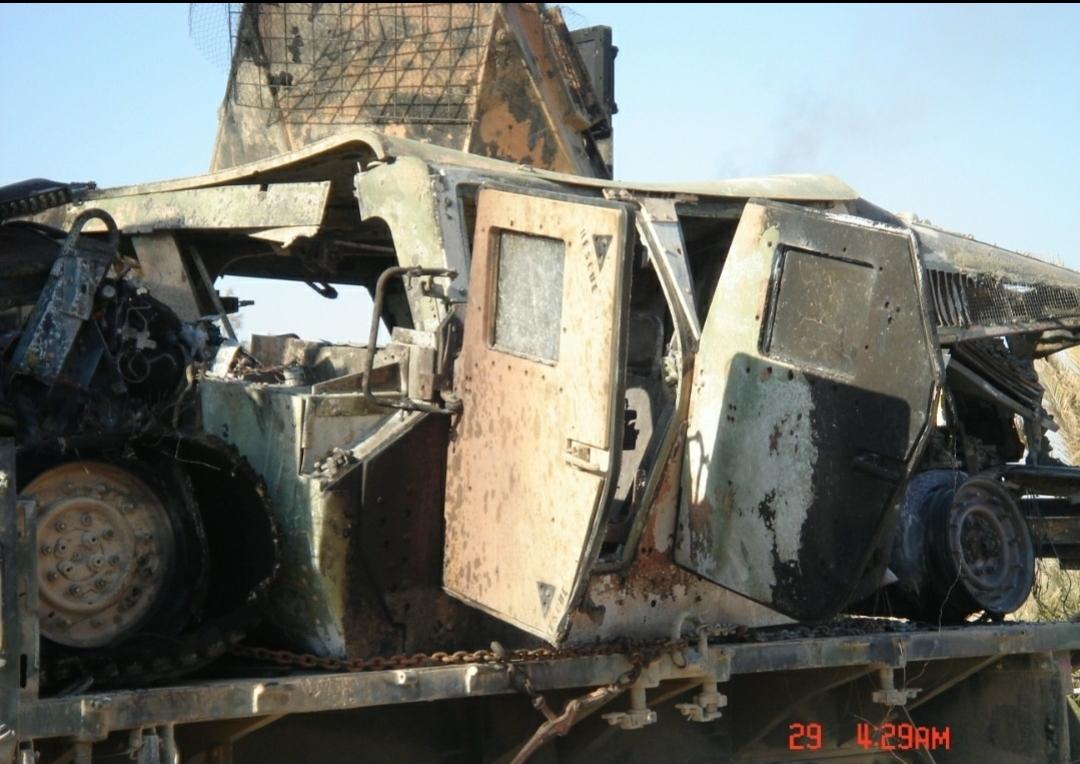 All hell broke loose. Shouts of "Are you OK? Are you OK?" filled the air as they did a roll call inside the Humvee.

"I'm good," Chad says. All he knows is he's having trouble seeing.

One of his teammates opens his door, and that's when Chad realizes his right leg is gone from the knee down.

They try to remove him from the front seat, but his left leg is smashed and trapped under the dash. They work to remove him as the vehicle is on fire and the fear of snipers can start shooting any time.

Chad's eye is damaged and his left leg is badly broken but intact. His right leg is gone.

The gunner is blown out of the Humvee and has no serious injuries. The others are all hurt, but nothing that sends them home.

The soldier that was supposed to be the driver was in the rear left seat and did not sustain any injury.

"You might say that was his lucky day!" Chad reflects.

The area was too hot, and they were unable to get a helicopter in for extraction. They had to get a new Humvee and go to the Fallujah surgical base. This was outside the city, and they feared hitting another IED on their route. They made it and stabilized Chad's injuries as they prepared him to fly to Bagdad. 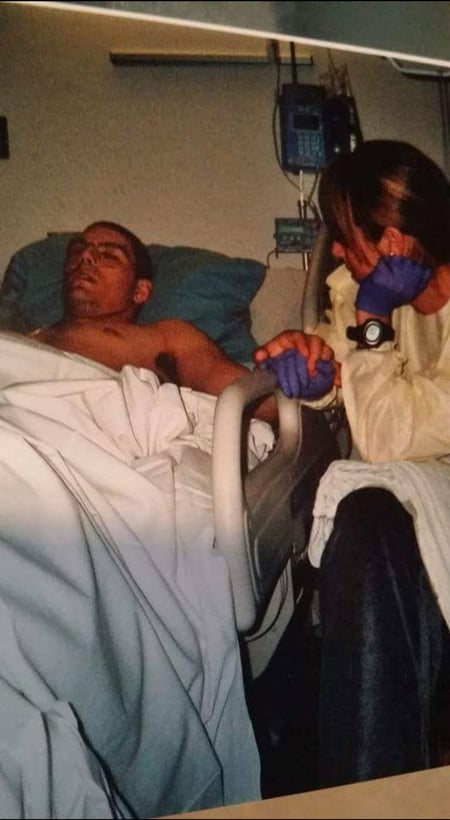 Chad's parents were contacted and were told he sustained a serious leg injury and would call them in a week. They were also warned he may have brain injuries and were eagerly awaiting more information.

Chad called them a couple hours later. You can imagine the joy they felt hearing his voice, and it became clear he didn't have brain damage.

"We were told you had a serious leg injury," Chad's father said.

Chad then flew to Germany for more surgeries of clean up and then on to Bethesda and Walter Reed. 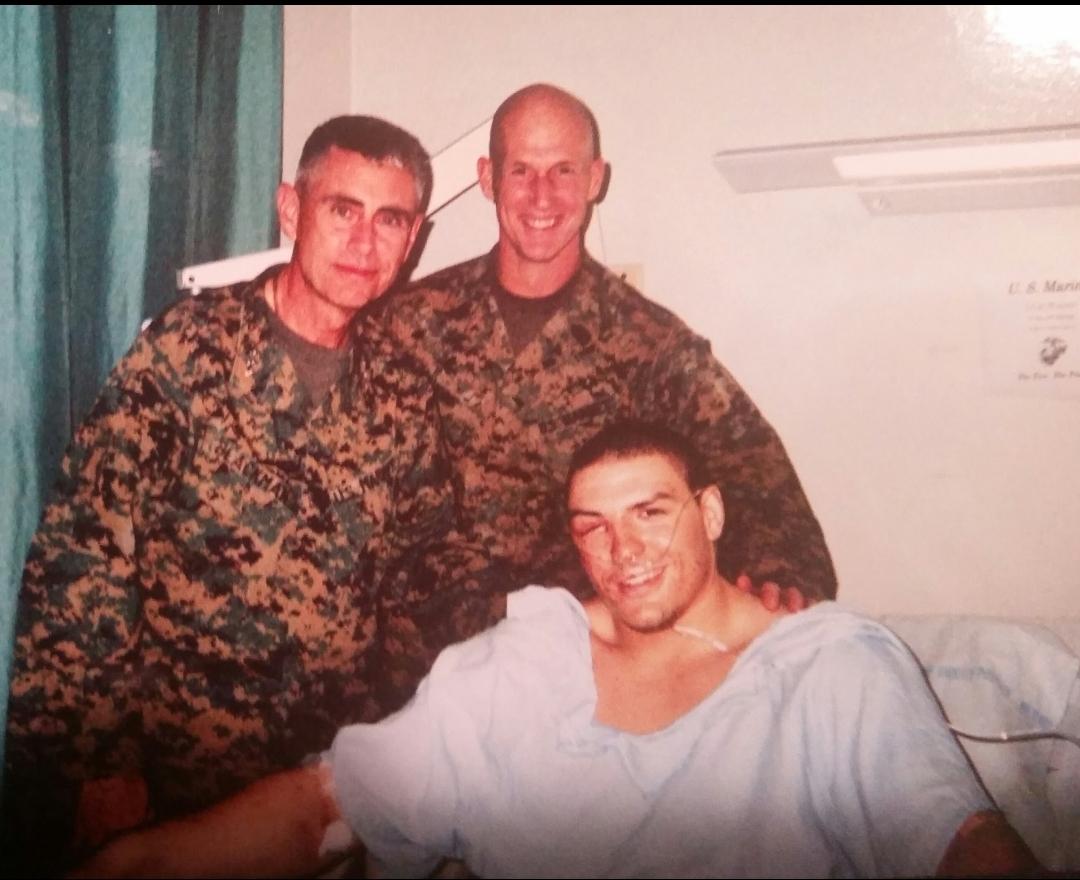 There are several more captivating stories, but one story that stands out to me is when Chad gets word that the President of the United States is coming to pin a medal on him.

Chad is now missing his right leg, and his left leg is badly broken. 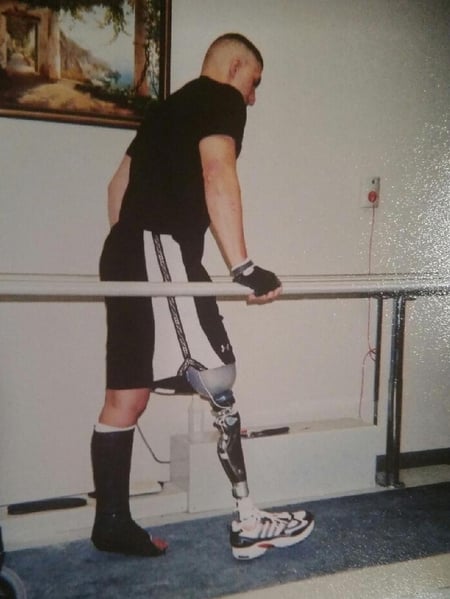 He tells the staff at Walter Reed he needs a walker to prop himself up.  "I will not get my medal from the Commander in Chief laying down," he said.

His Dad helps him get up vertically, and they're ready for President Bush and First Lady Laura Bush to give him his medal. 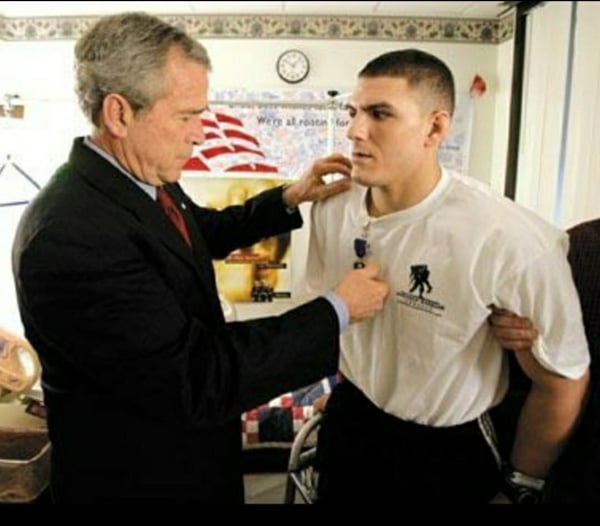 That, my friends, is a warrior.

Chad and President Bush had great discussion about baseball, and that year, his favorite baseball team won the World Series. President Bush invited him to the White House as his special guest when the Cardinals came for their visit to the President. 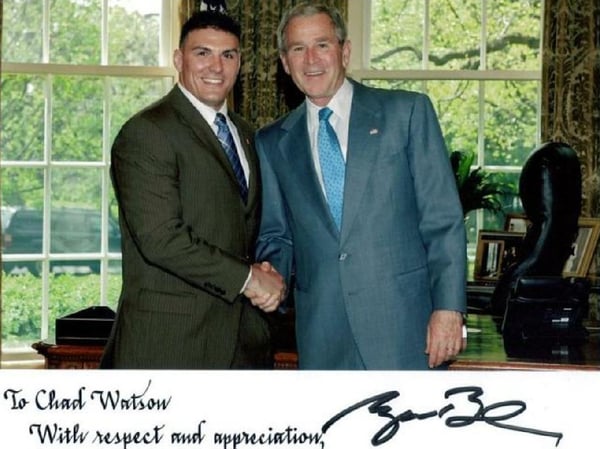 I would like to have a brief moment to acknowledge Chad's parents, siblings, and girlfriend – who is now his wife – Jill. All were on pins and needles during this whole process, and I want to applaud them and their sacrifices for our country.  This is when, in person, they get a standing ovation. 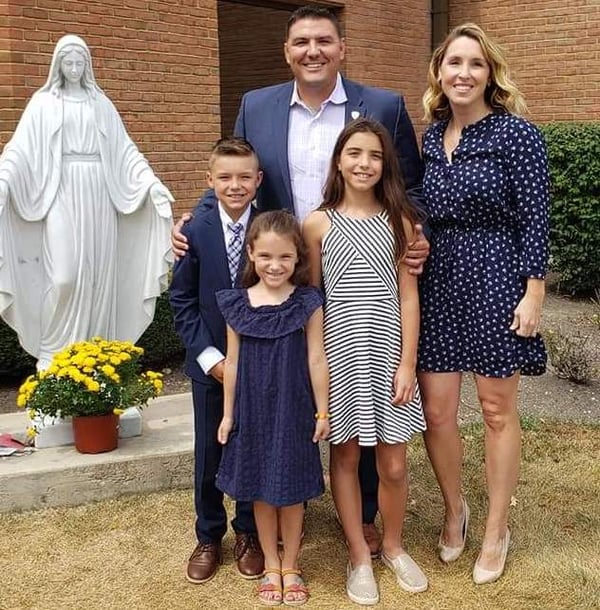 There is so much more to Chad's service, but I want to point out he would have gone back to serve if his body had been able. He later served in a different capacity with the FBI on terrorism.

Chad went back to school to finish his degree and got his MBA from Notre Dame. He is the proud Father of Shae (10), Cael (9), and Breanna (6). Chad now works for Medtronic, a medical device company, in Northern Illinois.

There are tons of stories of great courage and service to our awesome country.

Chad and others don't get defeated. They don't say "woe is me." They are the types of leaders that will knock you down if you're in their way, and they'll keep fighting. Our country is great because of men and women like Chad.

I was lucky enough to coach Chad and be a small piece in his life. That is a blessing to me! He is the type of man we need in leadership, and on this holiday of Veteran's Day, we need to say Thank You and God Bless You for your service.