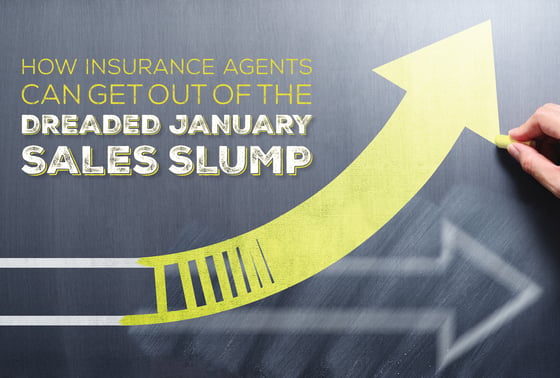 Let's face it – not a lot of business is written in January. Because you come off this high from AEP, it's like going from one extreme to the next.

I've just seen everyone in fourth quarter – how am I going to call my client and say "Hey, I just saw you... but let's go ahead and get together again!"

It's tough. It's really tough.

I'm OK with a slow month of January if I know that the first of February, I'm going to have a great game plan that'll stimulate a lot of activity and appointments.

But when we kick off the month of January... I just sit here and wonder how am I going to get this thing rolling again?

And I feel that way every year. I would think that most agents feel very similar.

So, here are three to-dos we recommend to help insurance agents get out of the dreaded January sales slump:

College students are going back to college sometime in January, so now is the time to start interviewing potential interns. Once you get the right ones, you'll have the remainder of January to train them, teach them your scripts, and show them the ropes.

Once they're trained up, they can start making anniversary date appointments.

I want to take care of anyone that has a renewal date between February and September. That way, I can only focus on Part D and that storm during fourth quarter.

Those outbound calls will begin at the end of January and the first of February. They could even be for March renewals – if you're 30 days ahead of schedule, that's great.

If the concept of interns is entirely new to you, I encourage you to take a look at this article: AEP Survival 101: How to Write Apps All Year Long

It explains a lot more about when it's time to hire an intern, why you should, what we pay per hour, etc.

For me, setting some goals gets me motivated for the new year. I know January will be slow, but February will really start things going again.

So during this slow time of January, I'm going to work on setting goals for the year. To maximize your goal-reaching success, be sure to write those goals down.

It seems like a rather pesky tip, but a study led by psychology professor Dr. Gail Matthews at the Dominican University in California found that you're 42% more likely to achieve your goals if you write them down.

So, what kinds of goals should you set for yourself?

That depends on where you want your business to go, but one goal I'd always set is your personal production for the year.

For the last 3 years, my personal production numbers have been very similar. While they've been great years, it has kind of bugged me that I haven't increased by pretty good strides each year.

I start to wonder... is there this glass ceiling that's been put on me? Because I serve so many clients, have I hit this wall where I can't really grow a whole lot more?

That idea bothers me. So I'm setting some goals. I've been around $900,000 for the last few years, and hey, those are great years, but I always want to do better than I did the year before.

UPDATE! I have an update to make since we wrote this article at the end of 2018 – I did hit the $1M mark! Setting that goal and seeing it through has been such a rewarding experience. I highly encourage you to push yourself for the new year. It gives you the motivation to keep going, even during the slow times.

If you're an agency owner, I encourage you to read this article: The Ultimate Guide to Setting Meaningful Goals for Your Insurance Agency

It goes through setting goals for your downline agents, and also how to take a look at the bigger picture. Jeff Sams also shares some of the things he's done to set goals for the local agency.

3. Jump start your year with training

If you're feeling burnt out, or you're simply ready to grow your business like never before, start doing some training! Whether that's checking out our product training hubs or attending some webinars, now is a great time to get started.

If you want to make yourself more efficient, more effective, and a well-rounded producer, then jump start the new year by getting some education!

We have an annuity training hub:

And we have tons of tip sheets and training materials to consider. It's the slow season, so make the most of it!

Getting over that January sales slump is all about setting some goals and creating a game plan for your year. It doesn't have to be a slow season for you if you're being proactive about the new year.

For me, I know that January is not going to hold a lot of tremendous activity in front of my clients. Once I can come to that realization, I can focus on how I can make January productive.