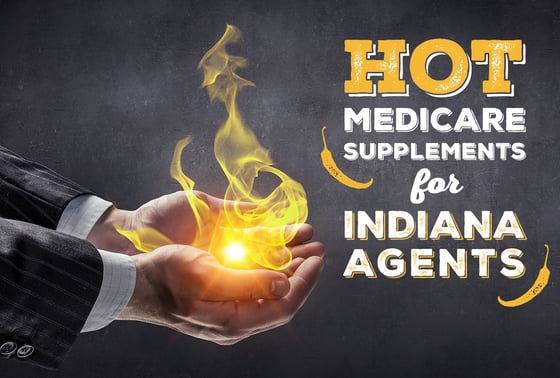 Attention Med Supp agents in Indiana! We do a lot of business out of Indiana and decided to share the best carriers as we head into the second quarter of 2020.

This is our second edition of this article, and we'll continue to update it as long as Indiana guys and gals find it useful. Share any feedback you might have in the comments section below.

We realize that Indiana is really split up into two rate bands:

Rates aren't different between these two bands every time, but they often are. We'll be accounting for these rate differences with our recommendations.

Finally, the majority of the rate samples we're giving are for a 70-year-old female. Our average customer is 71 years old, so that's why we use that for our examples.

Without further ado, if you offer these four Med Supp carriers in Indiana, you'll be rock solid for this second quarter of 2020.

We are doing a lot of Mutual of Omaha Plan G in Indiana. You have a trifecta right now:

You'll also find a great rate on Plan N in the higher band at $81.33.** Mutual of Omaha is in the second slot for that Plan N rate in Indianapolis.

Mutual of Omaha isn't as competitive in the lower band, but it's still up there. If you're a Plan G guy, MOO is a great carrier to be focusing on right now.

When you turn on the household discount, GSL is hanging right in there in the lower band, particularly on Plan F. If you have clients that want a good buy on F, GSL is a great choice.

This is assuming you apply the HHD, but keep in mind that pretty much everyone will qualify for it. Here's the qualification:

While they aren't at the very top of the heap, they have so many benefits for the writing agent, and really, it's only a few dollars difference between GSL and the No. 1 carrier on Plan F.

Here are some reminders on why GSL is one of our top Indiana picks:

If you live in the lower rate band in Indiana, Capitol Life is a must-have carrier. Here are some samples for a 70-year-old female:

Capitol is also very competitive in the lower band for 65-year-olds:

Like GSL, Capitol Life has a fantastic underwriting system which is called "red, yellow, and green." While an instant decision is fantastic, there can be pitfalls, like a client getting declined for something frivolous that just requires a little explanation.

Capitol Life has solved that underwriting problem by offering this new system where green light is approved, red light is denied, and yellow light is a quick phone interview to clarify some details.

We're confident that if you give Capitol Life a go, you won't look back.

As you might have already guessed, you can't deny that Accendo/CVS Health has some of the best Medicare Supplement rates in Indiana right now, particularly on F and N. They also have a 14% household discount, which is the highest in the industry.

Here are some samples from the higher rate band, which includes Indianapolis:

And here are the samples from the lower rate band:

Besides the rates, Accendo has some other nice perks:

If you are contracted with Aetna, you don't need to get contracted again to sell Accendo.

Do You Have the Hottest Indiana Med Supp Carriers In Your Portfolio?

The quoter is so nice, because it's easy to shop around. Take a few minutes to try some different scenarios in your zip code.

If you don't have these 4 Medicare Supplements carriers in your portfolio, we'd love to help you get set up. We make the contracting process easy – the gals in our office are some of the best in the game!

In addition, these four carriers are featured in our State of the Union on 2020 Medicare Supplement Companies. Check that out for even more info on why these companies are red hot right now.

Let us know if we can do anything else to support your efforts, and good selling!