Is Selling for Incentives Doing a Disservice to Your Clients? 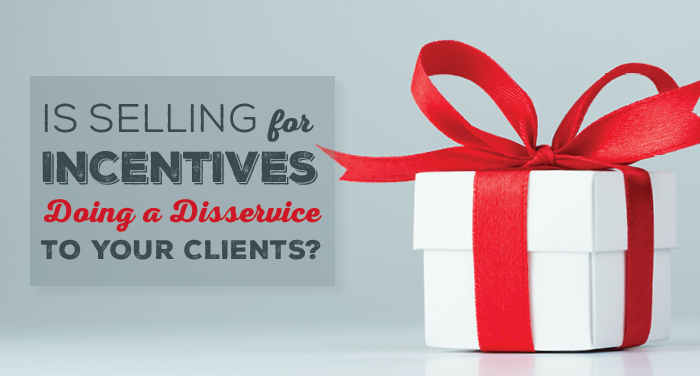 Back when I was an agent, I only sold one company – that’s all I had. So if I was trying to win a trip, it wasn’t like I was choosing between companies. It was a non-issue for me.

There are a ton of companies to choose from, particularly when we’re talking about Medicare Supplements. When it comes to incentives, are you doing your client a disservice if you focus on one company over the others?

Is selling a Med Supp for the incentive morally wrong?

The different between 1st place, the lowest price, and the 5th place company is generally $4-5 per month. Maybe. Sometimes it’s even tighter than that.

I don’t think you’re doing your client a disservice if you’re $4/month higher that Company A, when Company A may be brand new to the marketplace. Company A may not have a A+ rating. There’s so many different factors to consider besides just the price.

If you’re selling price and price alone… I don’t know that that’s the best interest of the client either.

Now, we can go to the other extreme where you’re selling a company that’s $20 higher than the others, and you’re only selling it because you want to win their trip. That’s wrong.

But in reality, so many of these companies are so close together in price that I don’t think you’re doing your client a disservice as long as you’re selling a good company with a good track record.

How do you choose which incentive to go for?

As a producer, I look at price and underwriting.

It’s hard to pick a company where you know one spouse can get it and the other spouse isn’t going to pass. You’re much better off getting them a discount if they’re both with the same carrier.

So, that’d be the company I’d place them with.

I’d pick the companies that:

Once you win these trips, your spouse or significant other will be saying, “My gosh, these are fun.” It’s one of the benefits of being an independent agent.

Is it bad to write most of my business with one company?

If you’re shooting for an incentive, it’s likely that a majority of your business will be with one company.

And I’d just advise that it’s always good to not have all your eggs in one basket.

For example, if a carrier has a massive rate increase or they change something drastically, suddenly your entire book is at risk, and you’re scrambling to retain your customers.

But I think incentive trips are absolutely one of the best perks of being an independent agent. It’s what every good producer should shoot for.

Just don’t put it in front of the needs of your customer.

You can always see an up-to-date list of the incentives, trips, and bonuses at http://www.newhorizonsmktg.com/contests-incentives.htm.

The current trip destinations are:

Which trip are you shooting for?