Substandard Medicare Supplements: What are they, and when should I sell them? 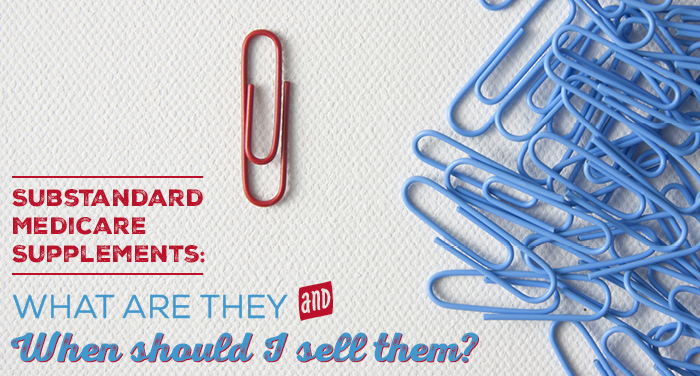 If your clients have minor health issues, and they don’t currently qualify for Guaranteed Issue or Open Enrollment, a substandard Medicare Supplement can be a potential option.

A substandard Medicare Supplement is a more expensive supplement for those with minor health conditions such as diabetes, those who exceed the limits of a height/weight chart, and those who use tobacco.

There are generally different rate classes for Medicare Supplements, and “substandard” refers to a person who can’t pass all the health questions.

For example, Cigna has 4 rate classes:

The lowest-cost plan would be Preferred, while the highest cost would be Standard III.

To be clear, "substandard" only refers to health and underwriting. The coverage is going to be the same whether the client is considered preferred and gets the best rate or if they are substandard and get a more expensive rate. An F is always an F.

When would I choose a substandard Medicare Supplement?

If your client is in open enrollment, or it’s Guaranteed Issue (GI), you wouldn’t choose a substandard Medigap plan, because they don’t have to pass medical underwriting.

The purpose of a substandard Medicare Supplement is to give those with minor health conditions insurance coverage, but it’s going to be a higher premium.

If your client has been enrolled in Medicare Parts A and B for at least 6 months, they no longer qualify for open enrollment. In these cases, if they have health issues, they would be a good candidate for a substandard supplement.

Another example is a client who wants to switch from Medicare Advantage to Medigap, but they can’t qualify for a preferred Med Supp. (Remember that the coverage is the same for both preferred supplements and substandard supplements.)

In Illinois, the case is a little bit different because of Blue Cross Blue Shield’s supplement that has no health questions.

While it may be worthwhile to compare BCBS to substandard Med Supps, many Illinois agents find that their clients are on edge once they’ve been declined once.

Laura explains, “Once they’ve been declined once, they’re already on the fence about moving around. They’re so upset and angry about being declined. Knowing that Blue Cross is a definite ‘yes’ keeps me from the losing the sale altogether.”

In this situation, it can be important to coach up your client a bit. I would make a little joke and say something like, “You get 3 strikes before you’re out.” It’s true that some people can get scared or offended if they are declined, but if you anticipate that, you can coach the client up so they know what to expect.

You can use our quote engine at any time to see the substandard rates of Medicare Supplements.

Here are some examples.

It is important to note that Cigna’s Standard II policy is more lenient than Equitable’s, which explains the higher rate.

For agents in Illinois, Blue Cross beats those 2 rates with $139, but that’s not always the case. You can always check using the quote engine.

That gives you a quick glimpse at how substandard rates compare to regular rates.

What health issues can you have with a substandard Medicare Supplement?

The 2 companies we currently have that offer substandard rates are Equitable and Cigna.

Cigna has the 3 substandard classes (Standard, Standard II, Standard III), and Equitable has a “Standard” class.

We’ll go over what’s allowed with these different rate classes.

The regular rate class, which is called “Ultimate,” requires you to answer “no” to all health questions in the app, and you have to fall within the height and weight chart.

However, the “Standard” rate class allows individuals who have:

There is also a special height and weight chart for this class.

This option is generally about 40% more expensive than the most competitive rate.

Standard requires all of the same guidelines as preferred, but the height and weight chart is different – it’s called “Maximum weight with selected conditions.”

Standard II requires that all health questions in Part A to be answered no and the applicant is tobacco-free, but here are the more lenient areas:

This rate class is usually 2 ½ times more expensive than the most competitive supplement.

Standard III is the same as Standard II, but the applicant may be a tobacco user.

We hope this helps you understand your client’s options when they may not be able to pass health questions.