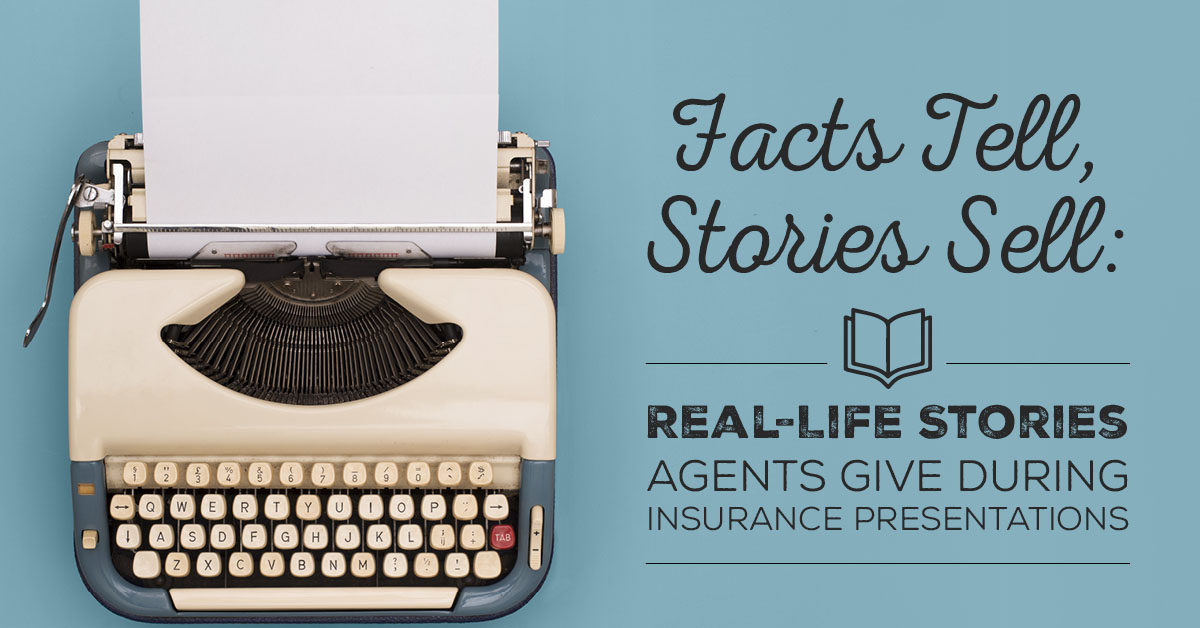 Though we’re not quite sure where the slogan “facts tell, stories sell” came from, it’s a phrase we often come back to when talking about insurance presentations.

Citing off statistics and insurance facts can definitely help, but most of the time, people forget it. But stories? Stories stick. And research backs that up – 63% of people remember stories, while only 5% remember statistics.

We’re not saying you should ditch stats – they definitely help add credibility and professionality to your entire pitch. But if you want an important point to resonate with your client, a story is the way to go.

Rather than giving you theoretical examples, we interviewed a few agents here at New Horizons. They’ve been kind enough to share some of the stories they often use when they need an important point to stick. There’s a little bit of everything, but I want to encourage you to share your own story in the comment section below. What story do you fall back on when giving presentations?

Stories can help in many ways. For Jeff Greenwell, independent insurance agent, he likes to tell a story that urges his clients to set their payments to auto-draft.

One day, Jeff got a call from the wife of an old friend. She said her husband’s Medicare Supplement had lapsed, and she needed help getting another one. Keep in mind that this was not Jeff’s client at the time.

Jeff recalls, “When I arrived, she explained that Jim was in the bedroom. I found Jim bedridden, hooked to a dialysis machine.”

Jim’s wife then explained to Jeff that she had been taking care of Jim for several months at home as he received dialysis treatments. She had become overwhelmed and forgot to pay the Medicare Supplement bill when it arrived. When she received the lapse notice, it was too late. The company would not reinstate the policy with a person as ill as Jim.

“There was nothing I could do,” Jeff explains. “Jim had to pay the coinsurance costs for another year of treatments before he passed. Jim never wanted any insurance to access his checking account, so he had all of his policies on bill basis.”

Jeff uses this story to help persuade all of his clients to set their payments on auto-draft. This completely avoids the possibility of their policy lapsing while they are sick or their spouse is sick.

Jeff also advises setting auto-draft for the day or day after their SS checks are deposited. This avoids the possibility of insufficient funds.

Jeff Sams, CEO & Principal here at New Horizons, doesn’t sell as much as he used to, but there’s one story he always falls back on when he pitches long-term care insurance to farmers.

If you’re a farmer and you have 400 acres that have taken you a lifetime to build up, and you think about how many acres you could lose, it’s a pain point that actually resonates.

“It was a farmer that actually said this to me. His wife was in a nursing home with Alzheimer’s, and she was 58. That farmer turned to me and said, ‘You know what this is costing me? An acre of farmland per month,’” Jeff recalls.

That stuck with him, and since that conversation, he’s used the story in a myriad of presentations. “When farmers hear that, they finally get it,” he says.

We know that Medicare doesn’t cover about 62% of cancer-related costs. That includes travel expenses, lodging, loss of income, and experimental drugs.

For Michael, an agent with over 13 years of experience, one story that has stuck with him and that he continues to use when giving cancer presentations is from a client named Marty.

He explains, “Marty was paying $4,700 per month out of his own pocket for an experimental drug. Experimental drugs aren’t covered by Medicare, but this drug had seen success with other cancer patients, and they expected it to increase his lifespan.”

This real-life example hits home for clients. The term “experimental drugs” doesn’t hold much meaning until you give an example like this one. In many cases, this does happen – there’s a drug out there that’s proving to help patients, but Medicare won’t cover it because it hasn’t been through the entire governmental regulatory process.

With this example, clients finally start to see why a cancer plan is such a great policy to have.

The Cost of Lodging

Another example Michael likes to use when it comes to cancer presentations is the cost of lodging should you need to go to a research or specialized cancer facility.

Michael explains, “One of my friends’ sons had to go to New York City for close to 4 months – renting an apartment downtown – because he had a rare throat cancer and had to get treatment there. You can imagine how expensive that was.”

While there are many things that Medicare won’t cover when it comes to having cancer, these two real-life examples showcase just how much the uncovered expenses can be.

This can also put into perspective how much the client might want in terms of a benefit. Once they hear these examples, a $10,000 benefit might not be adequate. That’s why Michael recommends giving 3 options – a $10,000, $20,000, and $30,000 benefit. He finds that most of the time, the client picks the middle option, but he’s often surprised at how many people do go for the $30,000 benefit.

Luke Hockaday: Fill Out Your Application Now – Not Later

We all know what can happen when a client leaves an appointment without filling out an app. The chances of them actually coming back to finish the application goes way down.

But another problem is that life happens, and while they were insurable at your initial meeting, they might not be a few days from now.

Luke Hockaday, Marketing Center Manager here at New Horizons, has a real-life story he often tells when a client wants to do the application later.

When he was filling out a CNA, the need for long-term care insurance came up. His client didn’t have any sort of LTC coverage, but her family had a lot of assets to protect.

“I made my presentation and she loved it,” he explains. “She was ready to fill out an application and get it going, but she felt too rushed. She was heading to Arizona for a couple weeks to escape our rough winters, and she wanted to wait until she got back.”

Luke tried to get her to fill out the app then and there since the process takes awhile, but she insisted on waiting. So, they set up an appointment for the day after she got back.

But the day before the appointment, Luke got a call from her husband.

“He told me she had a stroke in Arizona. She was now uninsurable for the product she wanted to buy,” Luke recalls.

Every time a client wants to wait to fill out an application, it’s important to explain that they may not be insurable tomorrow. Anything can happen, and this story from Luke shows that unfortunately, anything does happen.

Chase Gruening: Cancer Costs Are Real For the Whole Family

Chase Gruening, independent agent, always uses stories when he’s selling cancer plans. Even though he’s only been in the business for a few years, he’s had several clients cash in on policies he’s sold them.

Chase explains the most recent instance of a client who was able to use her cancer benefit: “She fell out of nowhere, and it turned out she had brain cancer. She lives alone, so her daughter had to come up to take care of her. The daughter didn’t plan for this, and she has a lot of unexpected expenses now. She’s missing work, she’s traveling back and forth, and she’s taking care of everything her mom used to on her own dime. There’s gas, loss of income, and even simple things like feeding the cat.”

Another story Chase will tell is a client whose cancer medication costs her $500 per month.

“These stories I go through every single time, and I’d say I’m hitting it 80-90% of the time when I package a cancer plan with a Plan G,” he explains. Chase prefers to sell a Cancer, Heart Attack, and Stroke plan because he feels that the coverage is more comprehensive.

“We all know someone who’s had cancer. I’m honest with my clients and tell them that I don’t know how much their cancer costs will be. But by using these examples and explaining that there will be out-of-pocket expenses, they start to get it.”

What if I don’t have any stories to tell?

If you’re a new agent, you aren’t going to have any of your own stories to tell just yet. But that shouldn’t stop you!

Jeff Sams explains, “When I’m helping another agent out, I’ll recycle stories to them that they can use. We all share things like that. In sales, we can recite numbers, but there’s nothing better than a story.”

Feel free to use any of the stories mentioned in this article. They’re all real-life instances of events that actually happened to people – there’s nothing wrong with using someone else’s story!

Alternatively, Jeff recommends getting your client to tell the story: “For example, if you’re pitching cancer, ask the client if they have any friends or family members who have had cancer. Then let them tell the story. I think that’s a big key in sales – don’t do all the talking. An inexperienced salesperson talks too much, and the experienced salesman gets their client to talk.”

What stories do you use to aid you during sales presentations? We’d love to hear about them in the comment section below! 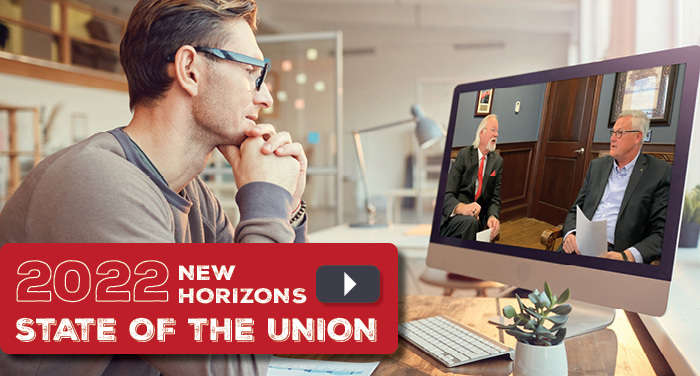