Level Up: Starting an Agency with the Licensed Only Agent (LOA) Model 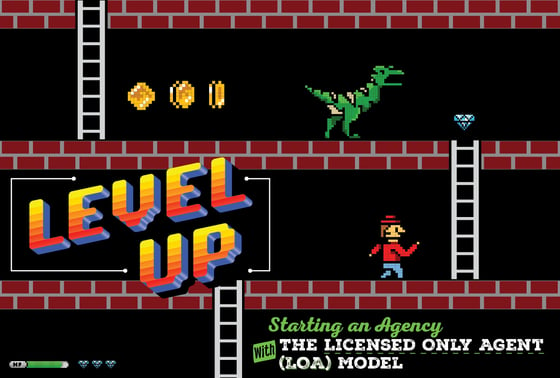 By John Hockaday and Jeff Sams

If you've been a successful agent for a few years, you might decide you want to start bringing on some new agents underneath you.

You can keep it small – maybe 10 agents underneath you maximum – and you can be a very successful agency. But before you just jump right in, there's a lot to consider.

In this article, we're covering a lot of ground, including pros and cons of starting an agency, what you should offer to your LOAs in exchange for your override, how people structure their compensation agreements, and more.

This is all based on 40 years of experience in senior market insurance sales, and we started our own agency way back when. We've also talked to many agency owners and are doing our best to compile all of that information in one place.

Interesting in growing your insurance business? Check out the other articles in the Level Up blog series.

What Does LOA Mean In Senior Market Insurance Sales?

A Licensed Only Agent (LOA) is an agent who assigns their commissions up to another individual or company. 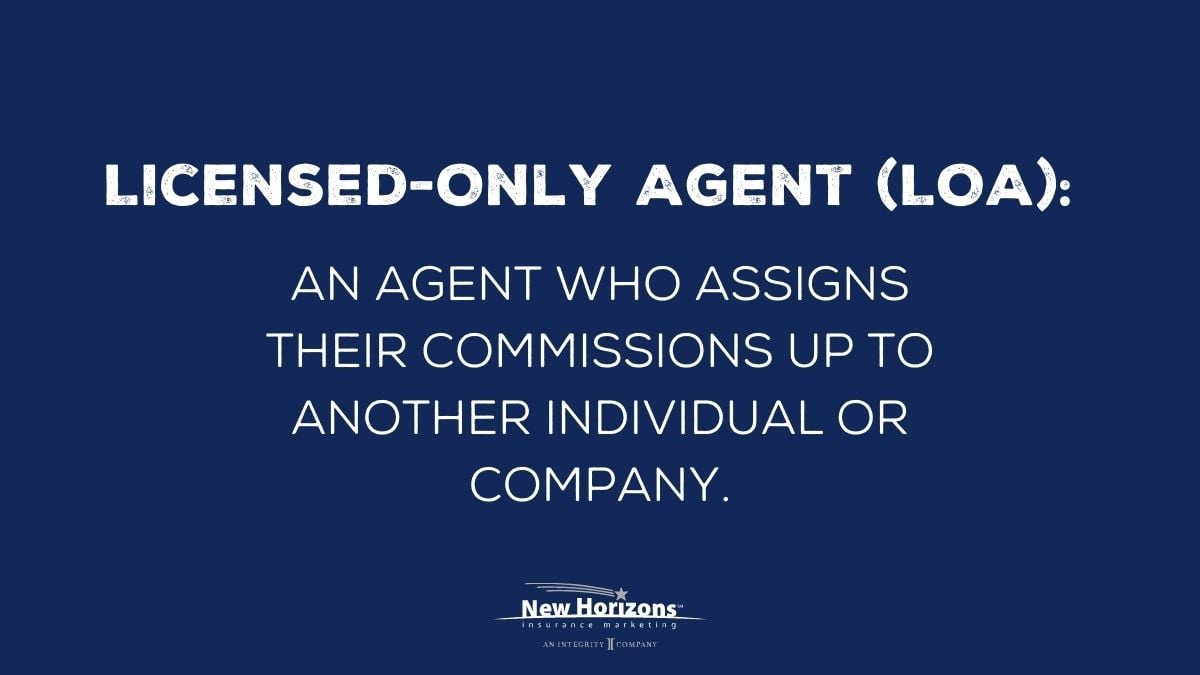 The individual or company receiving the commissions will keep a certain percentage, called an override. In exchange, the LOA gets a lot more support, structure, and training than an agent on their own.

For example, an LOA might get an office space, a secretary, and a maintained website without having to pay outright for any of that. All of that extra value is paid for via the override.

Pros and Cons of the Licensed Only Agent (LOA) Model

The LOA Model is probably the best one for very successful agents who want to bring on a few agents underneath them. The biggest pro is you can do a lot of production with 10 dedicated agents. If you're a very successful producer, it feels like a natural next step for growth.

We have agents at our local agency that have been with us for decades – I have to think we've done something right to warrant that. We've made lifelong friends and have made a real impact in our community.

However, there are a lot of things to think through: 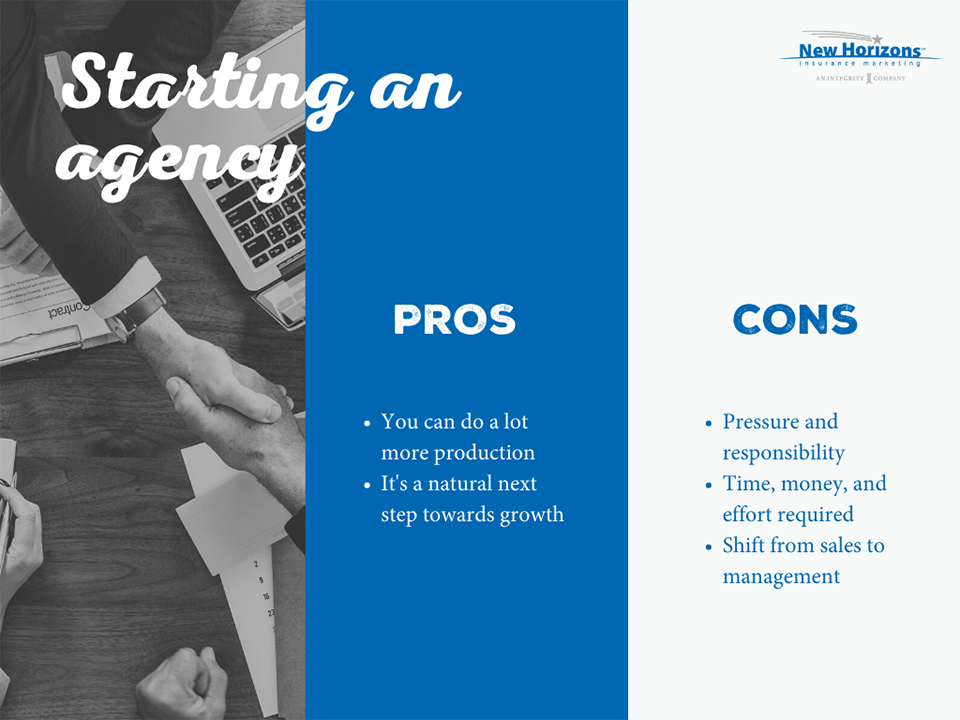 There's so much to consider before just jumping into the idea of recruiting agents.

I'd start with being honest with yourself: are you prepared for the pressure and responsibility of being an agency owner?

I remember not being able to sleep at night – I'd lay awake thinking about whether or not my agents were making a living. It's a lot of pressure, and you feel the responsibility of it.

From Sales to Management

You also need to ask yourself if you're cut out for being an agency owner. It takes the right person to be good at this. In my opinion, if you're a really good producer and you enjoy that, that gig is hard to beat.

When you start recruiting agents, you shift from sales to management. I see a lot of guys try it, and they should've just stuck with personal production because they hated it.

If you're a highly successful producer, I'd first consider hiring someone to help you, but keep doing what you do best. Support people can help you with the things you don't like to do.

In sum, you have to be management and coaching-enclined to be good at this.

Plus, if you're a good salesman, you fight the thought that you could be selling everything yourself. You end up being a babysitter, and that's not what you're looking for.

So, that's my word of caution for anyone thinking about starting an agency – seriously think it through first. We obviously took that step and have an agency, but it's definitely not for everyone.

If you're ready to start an agency and recruit some agents, one of the first things you need to think about is how to structure the agent compensation agreement.

We've tried to be as generous as we can at our agency because we know it's hard, especially when you're first starting. So we give our agents all that we can.

The commission split or structure can really vary, and you can also get creative with it. It could be 60/40 – meaning the LOA gets 60% and the house gets 40%, it could be 70/30, or it could be graduated depending on many years that agent has been with you.

A graduation of commissions can make a lot of sense because a brand new agent requires a lot more support than an established agent. As they graduate and need less help, the agency owner can then give them more commissions because they're doing less for them. 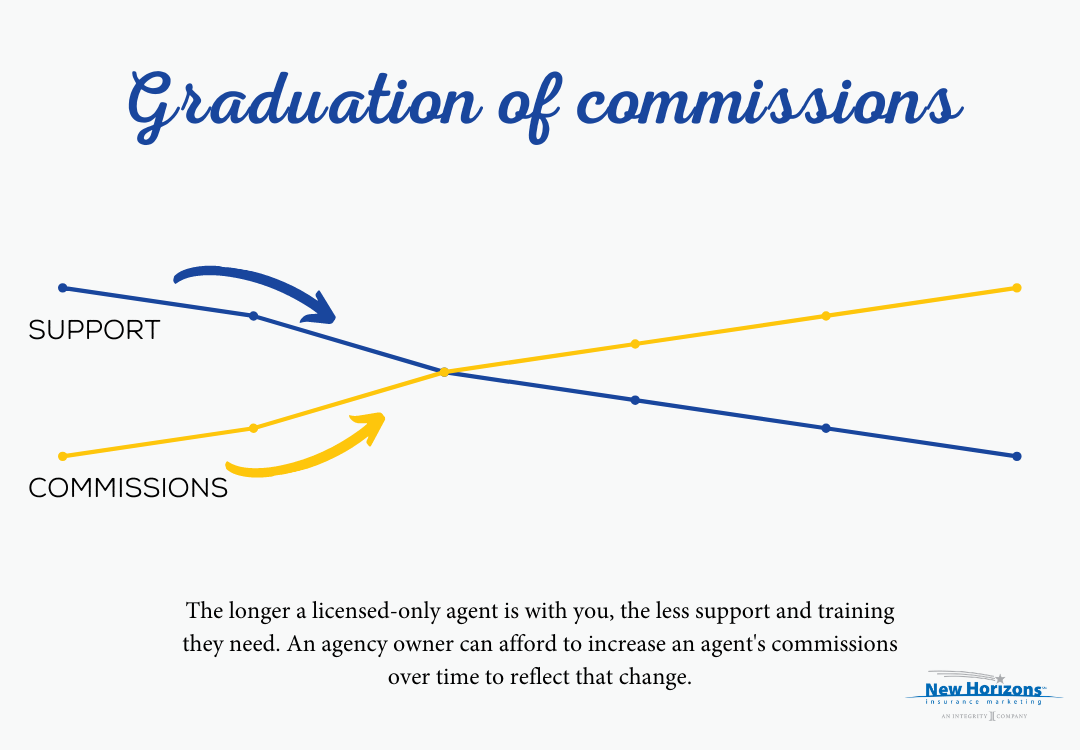 I've seen agents come up with all kinds of commission splits, but the key is making sure that what you're doing for the agent is enough to justify your override. It has to be fair for both sides.

If you provide office space and secretarial administrative help, that agency owner deserves more than the person that just gives a contract and tells you to work out of your home. And yet sometimes, those spreads are the same!

There's no magic to it – it's up to the agency owner to be fair. And it needs to be crystal clear: what does the agent get, and what value is that agent bringing to the agency?

The vesting agreement is also an important piece to include in your agreement.

An LOA assigns their commissions up, and they need to know their vesting arrangement. If they leave after a year, do they take anything with them, or are they just out?

Some will do a vesting period as long as 10 years, but I'd say around 3 years is the most common.

You really need a vesting period in your agreement, because those first few years require a ton of time, money, and effort. Getting an agent started is an enormous task. You may even be in the hole, especially in the first year, so is it fair for that agent to get all the training and support from you and then be able to leave once they're done?

You need that protection as an owner.

I'd say you need a lawyer to put together the initial contract. Then, you'll have a template you can use for agents moving forward. It's always best to make sure you don't leave anything out, especially in today's world.

A few items to make sure you include:

The vesting agreement and commission split are pretty simple – just decide on what's fair and include it. You can reference earlier in this article to get some ideas of what other people do.

You can train a person and teach an agent a lot, but if you don't have a non-compete, they can go in business in an office next door and be your competition.

In your LOA agreement, I'd suggest that you have a radius that they cannot do business within so many miles of you. 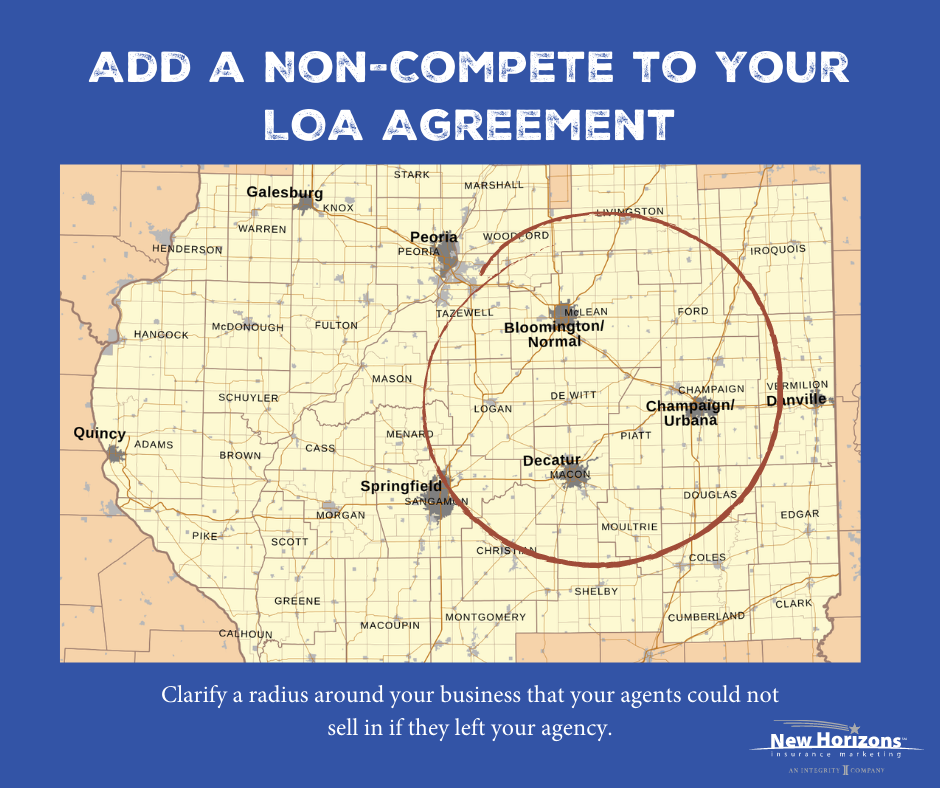 Who Owns the Book of Business?

If I'm looking from the agent's point of view, I want to know if the customers are mine or the agency's. If I bring in 100 policyholders, do I own that business or not?

That's a key difference – if I'm the agent, I want that business to be mine.

I do think the agent should be protected in the business they bring. They should own it and have the right to do with it what they want.

When the agent retires or if they have a change of heart and decide they don't like it, they have a block of business worth something. There ought to be a buyout agreement.

That's the way we've always done it, and I think it's fair. It allows agents to grow and not feel like they are stagnant. They are building something of value that's theirs.

Sometimes, the agent has no idea what they're signing, and they don't realize that the agency is taking advantage of them until it's too late.

Say you want to break away and work somewhere else. All of a sudden, they may say you can leave, but you don't get any of your business. So many agents don't realize what they're signing when they start.

We'd never do that, but a lot of people in this business do, so be aware.

If you're taking a piece of commission from an agent, you should be offering something of value to earn it.

Here are some examples of things you can provide to agents to make it fair for both sides: 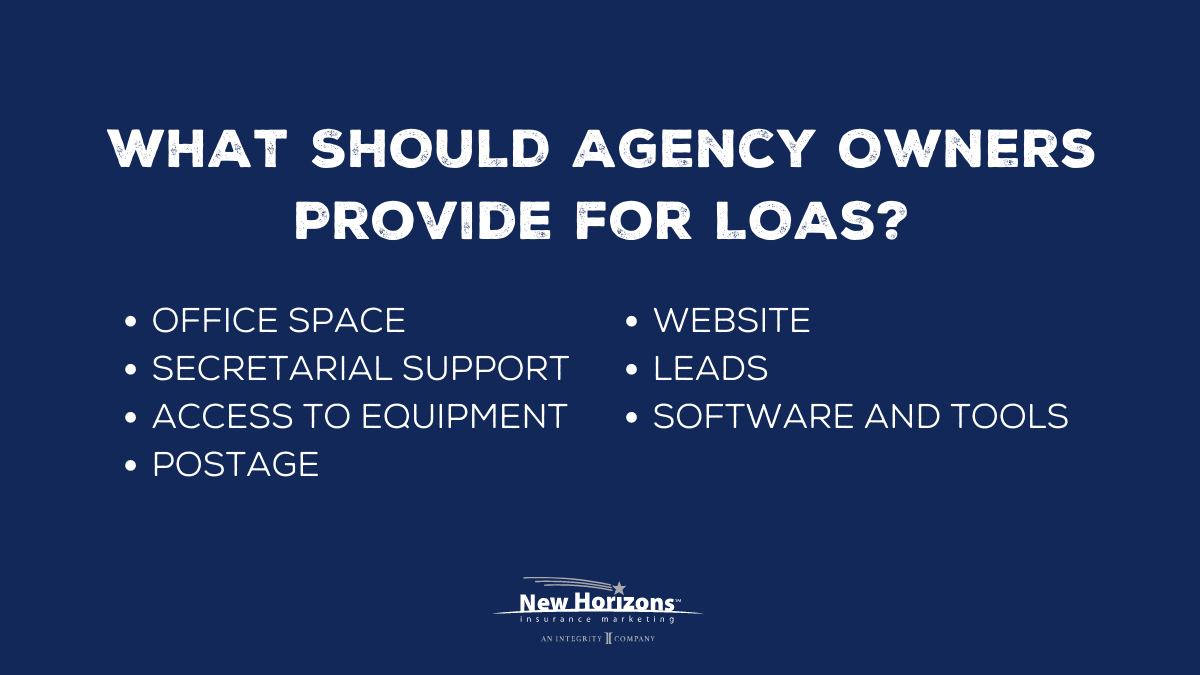 A person brand new to the business will have trouble making it on their own with no support system, and that's part of what makes becoming an LOA so attractive.

How to Retain LOAs Once They're Established

The biggest drawback of the LOA model is that the agents you nurture and train can eventually leave you. After a while, they feel that if they leave, they can make more by going out on their own.

How are you going to navigate those waters? It's important to have a game plan upfront before you start. For the agents that make it, how will you keep them and ensure they feel they can continue to grow?

For us, it's been a mix of providing a lot of value and also ensuring our agents own their book of business. It's an important topic to sit down and really think about before you invest a ton of time and money into new agents.

The key to starting an agency with the Licensed Only Agent (LOA) Model is having a clear understanding of expectations on both sides. What is the owner bringing to the table, and what is the agent going to bring? What's the succession plan in the event that agent wants out?

I never wanted a person to feel like once they came on, they could never grow. If you don't consider this, I think you'll end up losing all the agents you bring on.

I hope this was helpful. While we don't have any cookie-cutter templates and we don't do consulting on this topic, we're happy to help however we can.

Other articles in the Level Up series for agents looking to start an agency:

Articles in the Cover Your Bases series for agency owners: